This is massive! Airbus reveals its first flying car concept at the 2017 Geneva Motor Show

 Home   Electric  Technology  Trending  This is massive! Airbus reveals its first flying car concept at the 2017 Geneva Motor Show
Isaac Oguji
Aviation giant, Airbus has unveiled its newest flying car concept at the 2017 Geneva Motor Show. Earlier this year, we saw the first commercially-available flying car. Read more via this link: PAL-V LIBERTY Flying Car worth $399,000. Now Airbus has come up with its own concept which is entirely different in operation from the PAL-V and the Terrafugia TF-X flying cars. 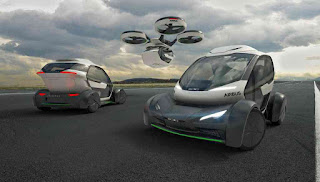 The new concept combines the power and efficiency of drones with the flexibility of cars.

The flying car is typically composed of three distinct units - a chassis, cabin which houses the car seats and other interior elements and a drone which hovers and attaches to the cabin for flight. The drone consists of four large fans, hence the name 'quadcopter'. 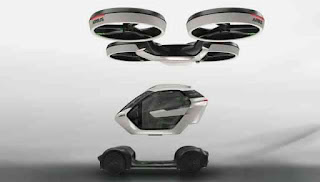 In terms of operation, the car is driven to a certain location, then the drone flies to attach itself to the top of the car. Next, the drone lifts the car with the car chassis left on the ground. In essence, only the cabin is airlifted.

The new concept according to Airbus is to reduce urban congestion emanating from passenger cars and other vehicles.

According to Techcrunch, "the concept vehicle is intended to work with others to form a network that can be summoned on demand, with passengers hailing a ride form an app on their mobile device. The capsule-based design can connect to either ground or air conveyance modules, letting customers specific their preferred method of transit. It’s also designed to be used in concert with other, existing transportation methods for maximum efficiency."

Watch the video below.