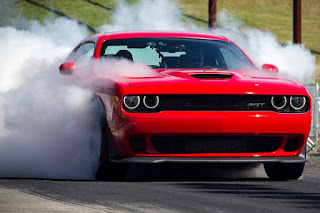 The obvious reason for the one seat is because passenger seats, and passengers weigh too much and would in turn slow the vehicle down.

The Demon's 840-horsepower 6.2-liter supercharged V8 engine is ultimately so powerful that you may not be able to handle. Like I said, it's not for the feeble-minded but for the brave at heart.

It's reported that the engine is the most powerful V8 engine ever put into a regular production car. That makes the Demon the most powerful factory-produced muscle car ever. Although it doesn't beat the 1,000-horsepower found in the Lucid Air electric sedan.

That record had previously been held by the 707-horsepower Dodge Challenger Hellcat, which seems like a house cat compared with the Demon, a car just unveiled ahead of the New York International Auto Show.

Reaching 0-100/hr in just 2.3 seconds, the 2018 Dodge Challenger SRT Demon has the most powerful V8 ever offered in a production car, thus it achieves so far the fastest 0-100/hr time for any production car.

According to media reports, the Demon is also the first production car able to accelerate so hard it can lift its front wheels off the pavement, a feat that has been certified by the Guinness Book of World Records. The front wheel can stay up in the air for almost three feet.

Basically meant for drag race, the Demon is legal to drive on public roads. The tires were specifically made for its purpose.