 Home   Automobile  Electric  Elon Musk shows off first image of a Tesla semi truck
Isaac Oguji
American electric car maker, Tesla has revealed plans to develop its electric and autonomous semi truck, following the success of its sedan cars and SUV especially the Tesla Models S and X. However, the most striking appearance resembling that of the Tesla Model S emanates from the front headlights which look too conventional for a truck - looks more like a big brother and an enlarged Model S. 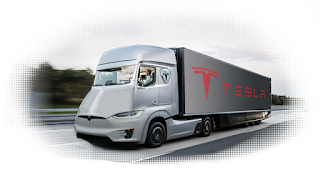 The new  teaser image surfaced at a TED talk at the 2017 TED Conference in Vancouver earlier which gives a clear depiction of Tesla's proposed electric truck.

Take closer look at the image. Tap on the image to get a sharper view.

A few shots were listed by Jalopnik which include the following:

• There will be very stylized headlights, with hockey-stick-shaped LED DRLs.

• The cabin seems to be the full height of the trailer; unlike conventional trucks with cabs that are about the height of the windshield, the Tesla truck seems like it’ll form a single, monolithic shape.

• There are no mirrors shown which suggest the truck may rely on external cameras as a replacement for the traditional side mirrors or perhaps it's just an omission in design proposal.

Other design proposals for the Tesla truck have also been revealed by Tesla enthusiasts and stakeholders. The one below takes a semblance of the Nikola H2 (Hydrogen-powered truck), and the second rendering is an insane and dynamic depiction of Walmart's future delivery truck.

Very important in the proposed design is the aerodynamic approach design given to the semi truck. The height of the cabin may not contribute much to fuel economy.

Elon Musk describes the truck as being “spry” and said it can be driven like a sports car which seems more of a daydream. I couldn't imagine a truck on the highway running at speeds above 200 mph or taking on the turbochargers and traction controls to drift.

Expectations are high as the truck is to be revealed come September this year.