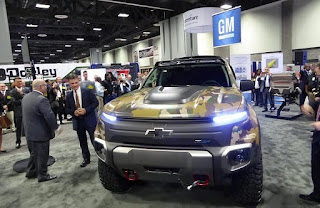 The Chevrolet Colorado ZH2 is a super-quiet, multifunctional sports utility vehicle perfect for military operations especially when stealth and quietness are of paramount importance.

The ZH2 does not run on petrol, diesel or kerosene, instead it pumps hydrogen into a fuel cell where the hydrogen combines with oxygen. In science, when you combine hydrogen and oxygen, you get water as the end result. Water is released and a high amount of energy is also released at the same time to power the vehicle. Plus soldiers can drink the water produced as it is clean and healthy. 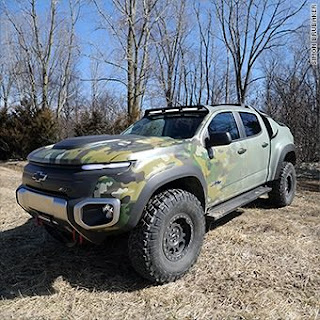 The truck was developed by GM (GM) in cooperation with the United States Army's Tank Automotive Research and Development Center (TARDEC), headquartered near Detroit.

Although not completely quiet as there are noises from the tyre rotation, suspension, electric motors, and when it starts initially, sucking in air.

Much heat isn't produced by the vehicle since it doesn't burn any fuel, therefore heat sensors cannot pick up thermal signatures which is another stealth feature of the SUV.

According to the maker, it is possible to convert the exhaust gas into potable drinking water.

Although hydrogen is the most abundant element in the universe, it doesn't ordinarily exist as a free-floating gas. It has to be extracted from substances that contain hydrogen, like water or hydrocarbon fuels. That can be done using portable devices that can run on solar or battery power or that plug in to a local electrical grid.