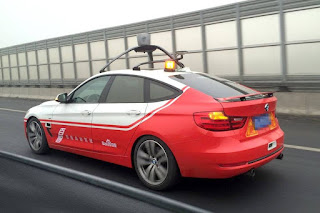 Not just Samsung, Apple also is interested in autonomous car technology as they already began developments. However, Google has been at the forefront at seeking ways of improving its already established self-driving technology. Not to mention the least, ride-hailing service Uber is also interested in the new gold.

Already, the company is forming a new team to work on its self-driving car technologies to show how serious they are. Although, the team would not manufacture an entire vehicle, they'd concentrate on the vehicle components.

Just so, Baidu has already been reported to have created China's first fully self-driving car which has so far achieved speeds of about 100km/hr according to State news agency Xinhua. The Verge reports that the so-called cars are modified BMW 3 Series vehicles being tested on expressways to the north of Beijing; they use laser radars, sensors, and cameras in combination with Baidu's mapping and deep-learning software.