 Home   Automobile  Electric  Motoring  Technology  Uganda unveils Africa's first solar-powered luxurious bus
Isaac Oguji
Uganda is proudly the first country in Africa to produce an all-electric luxurious bus powered by solar energy. Called the Kayoola bus, it was made by Kiira Motors and was recently test-driven during a show-off at a stadium in the capital of Uganda, Kampala. 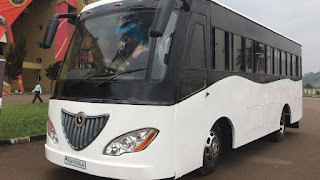 The automaker seeks to partner with prospective investors to mass-produce the bus for public purchase. Apparently at this time, only a prototype is available.

The bus uses two enormous batteries, with one being charged by the solar panels that are mounted on the roof of the vehicle, elongating the vehicle's range to 80km.

Kiira Motors' chief executive Paul Isaac Musasizi told BBC News that he had been "humbled" by the large and positive reaction to the test drive. 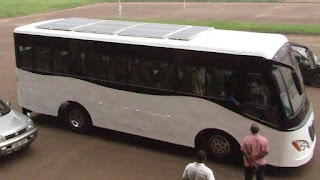 Musasizi hopes that the new innovation will help generate more employment for the Ugandan populace while appraising the development as the country is the first in Africa to champion this technology in the automobile segment. Ghana also produced an electric SUV which is powered by 14 accumulators. Read HERE

It is a 35-seat bus and is intended for urban transportation due to its limited distance, thus it may not be used for inter-state transport. At mass production, each bus would cost roughly $58,000 - a price which Mr Musasizi says is a competitive price.

Kiira Motors grew out of a project at Uganda's Makerere University, which is now a shareholder in the company, and it has also benefitted from government funding.