 Home   Autonomous  Videos  Volvo leads the way with automated self-driving refuse truck
Isaac Oguji
Volvo has a new refuse dump truck which is self-driving and highly automated. It's got lots of sensors around it to detect metal, plastic and any other thing during operation. This is part of Volvo's latest research and development in self-driving vehicles. 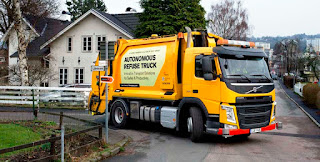 Volvo Group, together with Swedish waste and recycling specialists Renova, combine resources to test-run the new autonomous refuse truck testing a pioneering autonomous refuse truck which is aimed at enhancing safety and improved working conditions in the urban environment. That is not much of a surprise as Volvo's watchword and emphasis has always centered around "safety".

The new refuse truck is first of its kind and just as mentioned earlier, it is highly automated. It drives itself from one refuse bin to another, helping the human driver and making his work easier. In essence, the driver can now focus on refuse collection and doesn't have to bother about climbing or jumping in and out of the cabin to drive the truck from one house to the other. He gently walks down the street to each household to get the trash bin while the truck follows him around like a pet, driving itself. Afterwards, the operator loads the trash bin onto the automated platform of the truck, which in turn does the rest of the job. 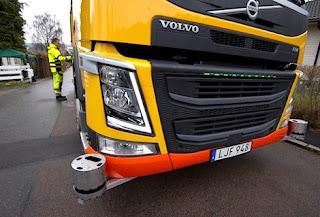 “There is amazing potential to transform the swift pace of technical developments in automation into practical benefits for customers and, more broadly, society in general. Our self-driving refuse truck is leading the way in this field globally, and one of several exciting autonomous innovations we are working with right now,” says Lars Stenqvist, Chief Technology Officer, Volvo Group. 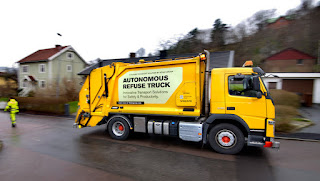 “One important benefit of the new technology is a reduction in the risk of occupational injuries, such as wear in knee joints – otherwise a common ailment among staff working with refuse collection,” explains Lars Stenqvist.

The joint project with Renova will continue until end of 2017. The autonomous truck currently being tested is fitted with a sensor system for identification, navigation, and monitoring of the vehicle’s vicinity. Most of this technology is also used in the autonomous truck for mining operations that Volvo Group unveiled in 2016. That self-driving truck is undergoing tests in the Kristineberg Mine in northern Sweden.

See the new truck in action!