 Home   Automobile  Aviation  Trending  Videos  Watch as Porsche Cayenne S Turbo Desiel tow Air France Airbus A380 Aircraft
Isaac Oguji
Power doesn't just belong the the big and mighty but also to the small and smart. Usually, heavy-duty trucks perform this kind of task but Porsche decided to make A Guinness World Record for the heaviest aircraft pulled by a passenger car. They therefore placed a premium on their much-celebrated flagship model, the Cayenne S Turbo SUV. For the record purpose, the organizing team decided to use a diesel engine model for more power and heaviness.

Previously, Toyota made a record by using their Tundra truck to tow an almost 1000-pound space shuttle back in 2012, but Porsche’s latest feat is overwhelmingly greater. Now, a Cayenne S Diesel has towed a massive Airbus A380, setting a new world record for the heaviest aircraft pull by a production car. 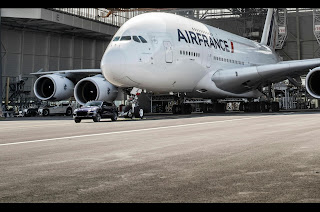 The aircraft was pulled for a distance of 42 metres at the Charles de Gaulle Airport in Paris. To achieve the new record, a special tow attachment was connected to the Cayenne’s standard tow bar. Officials from the Guinness World Records were on hand to oversee the stunt and ensure the vehicle was up to production standard. 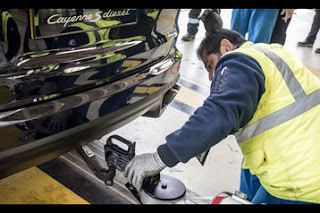 The Airbus aircraft belonged to Air France, weighing over 628,000 pounds. After beating the world record with the Cayenne S Diesel, Porsche repeated the exercise with a 570-hp Cayenne Turbo S. 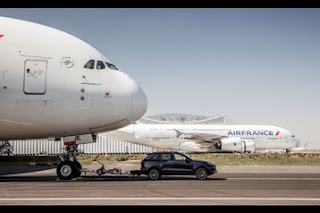 This test has pushed the Cayenne to its limits says Richard Payne, a Porsche technician who guided the Cayenne to the record. “I could tell that it was working hard but the Cayenne didn’t complain and just got on with it. My mirrors were quite full of Airbus, which was interesting,” he said in a statement.

Watch the Cayenne Turbo S in action below.