2018 Honda Accord: Refreshing or Revolting?

 Home   Honda  Reviews  Technology  2018 Honda Accord: Refreshing or Revolting?
Isaac Oguji
Honda Accord is now in its 10th generation with a new model which features a refreshed and redesigned outlook both interior and exterior-wise. Best of it all, it rocks a 10-speed automatic transmission as stated on Motor Trend. 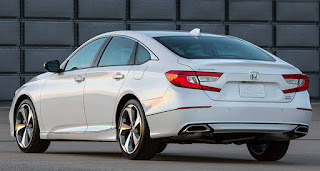 Notice the new grille design and the NSX styling of the headlights just like on the new Acura models. The silver bar has moved up the grille and overlaps significantly with the headlights. Below the bar, the grille narrows like a funnel in a unit that appears integrated, unlike the previous Accord that featured a clearer separation between the upper and lower grilles. The headlights on the 2018 Honda Accord are narrower, and the hood is chiseled and low to the ground, establishing an aggressive presence.


The infotainment system on the new Honda Accord gets a single touchscreen that sits atop the dashboard. The air vents are now positioned below the screen instead of to the side, and the arrangement of buttons and knobs has changed. There is now a physical knob for changing the volume, instead of the slider from the previous model. As well, there's plenty of room inside the cabin and a reasonable leg space.