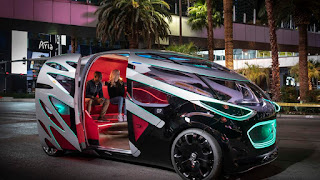 It is an autonomous vehicle which is based on a chassis platform, it is both electric and fully autonomous. It also features interchangeable modules that are placed on top of it, which can be swapped out in few minutes, depending on what needs to be hauled around.


It has a cabin which can accommodate up to 12 passengers at a go, with plenty of windows and a large panoramic moon-roof surrounded by an LED light display. Seats are arranged in a circle, with two-level seating in the back of the pod.

According to CNET, the Urbanetic is connected to real-time traffic reports and can also monitor local events and send a fleet out to a location, say a stadium after a concert, in anticipation of increased demand. It can communicate with people outside of the pod through displays on the front and sides. The Urbanetic "sees" pedestrians before they even step off the curb.