 Home   Ford  Truck  Watch as this Europe Design Ford Ranger tows 15 camper trailers
Isaac Oguji
Now this video is just one of the most thrilling videos I've seen this year on YouTube. The plot starts out as an unintended real-life shoot of an impatient driver in an Audi car flashing his lights at the tail of the Ford Ranger camper trailerfor a possible overtaking. Unknown to the driver, it's a really a long convoy of 15 campers and surprisingly, a single 2.0-liter Euro-Spec Ford Ranger is doing all the pulling. 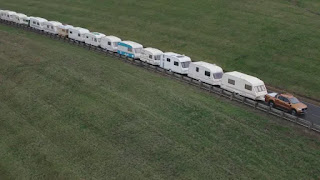 The Ranger towed a convoy weighing a total of 20 metric tons, which is more than 44,000 pounds. That's more than five times the official tow rating for the pickup. The Euro-spec Ranger has a 2.0-liter diesel engine and a towing capacity of up to 3,500 kg (7,716 pounds). For the experiment, Ford reinforced the campers (or caravans, as they're called in the U.K.) with steel frames and put tow bars in the front and rear.

Watch the video below: